At morning meeting today, I wrote a sad note to the students:

After sneaking a quick look at my shoes, the students were shocked that my sister would say such a thing, but they thought that I should say, “ok,” and accept her apology. I should forgive her…

This morning message was used to get the students thinking about our Swooper Citizens theme of the week: forgiveness. The first graders came over a few minutes later, we continued to discuss what it means to forgive. Cue to the Oscar moment…..

While I was talking to the students, I “tripped” over Ms. Atkinson’s leg and landed flat on the ground.  Really flat, with a loud boom, and a screech!

“Ms. Atkinson,” I yelled, “You tripped me on purpose! You are so mean! I’m NOT going to play with YOU today!”

“Well, sooo-rrr-yyyyy!” said a not-so-sorry Ms. Atkinson. “It’s your fault. YOU tripped YOURSELF!”

The students looked at us wide-eyed. Ms. Atkinson broke character and said, “But really, Mrs. Delwiche, are you ok? That looked like it hurt.”

After a good laugh, the students began to discuss what forgiveness is and how your tone of voice and actions can impact your apology and your ability to forgive.

Next, I read a wonderful book, the Forgiving Lion, aloud to the students. 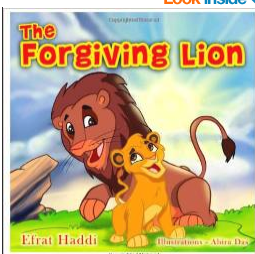 In the book, Leo the Lion has a hard time forgiving his friends. In fact, when they accidentally scare a bug away or drop a fish, Leo tells them he is so mad that he won’t be their friend. Suddenly Leo has no friends, since he won’t accept their apologies and forgive them. His wise father reminds Leo of a time when his son did something wrong and his father forgave him. Leo realizes that he needs to accept his friends’ apologies and move on.

This book offered us a perfect opportunity to discuss how our bodies begin to feel when we can’t move on from a situation. Some peoples hearts beat faster, other peoples stomachs are knotted up, while others feel their faces tighten. Ms. Atkinson brought up how sometimes she needs to take a break in order to calmly talk about a problem and be productive. This is a great strategy, we agreed.

Students recorded their messages about forgiveness in their Swooper Citizens journal. Here are two examples: 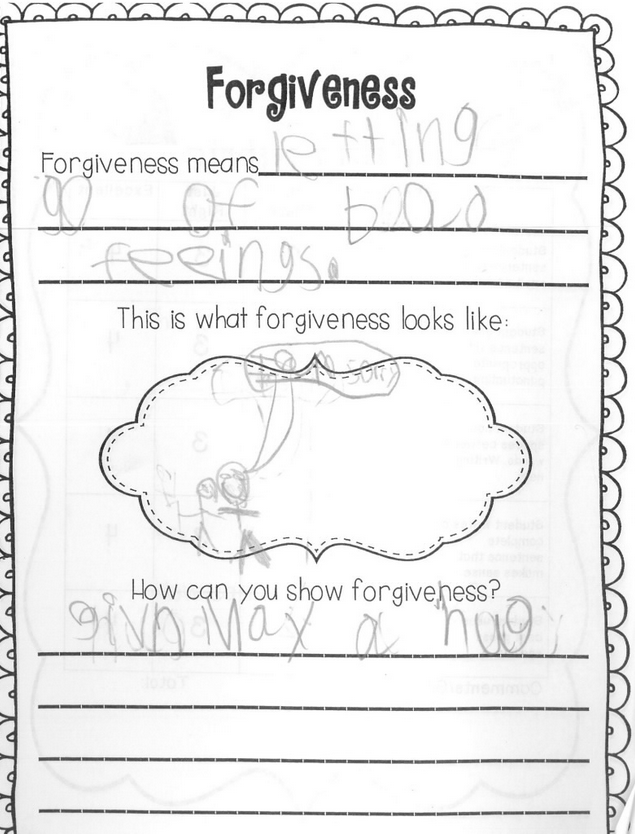 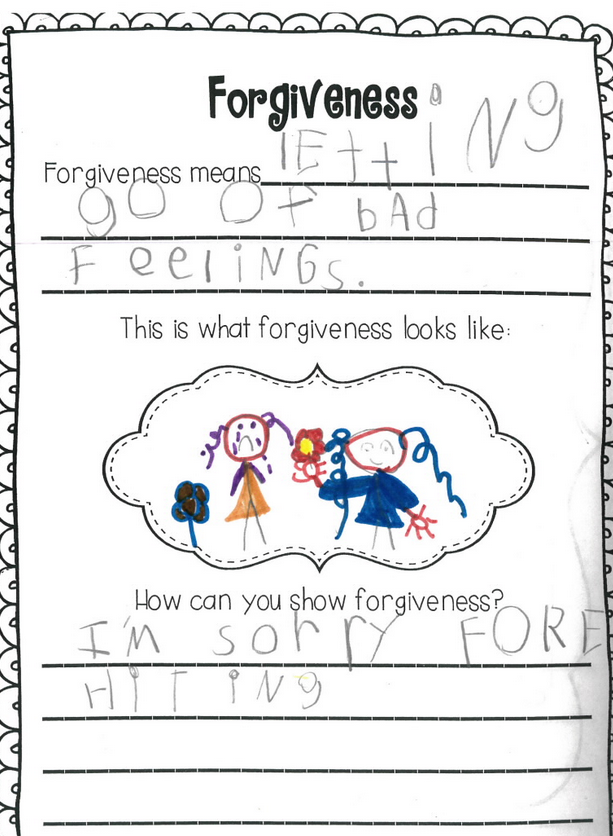 One thought on “Forgiveness”