Yesterday, the kindergarteners were introduced to the sense of taste. Did you know our tongue has 100,00 taste buds?!

Today, we used some of those taste buds to do a blind taste test. The students were told ahead of time that they would be tasting something sour, sweet, salty, and spicy. Ohhhh, you should have seen the excitement in their faces! Some were apprehensive about tasting the sour and spicy items, so I promised I would put the food into individual cups and they could spit it out if they wanted.

We started with a sour piece of lemon. No one was too grossed out by that! The students immediately guessed the taste. Next we moved on to a salty Cheez-It. Lots of thumbs up for that taste. Third, the students were given a teeny slice of a pepperoncini.  Here are some of my favorite pictures of the students tasting that! 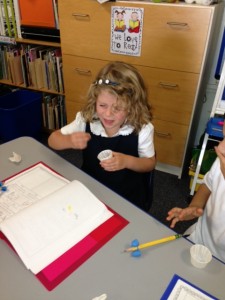 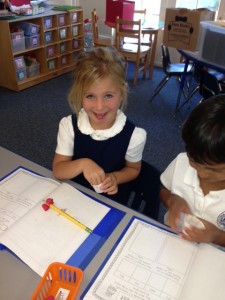 After a quick water break, the students had a chance to taste something sweet….a chocolate chip! No one spit that item out! 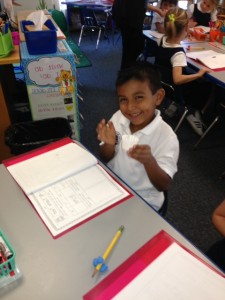 Since we were performing an experiment, we had to record our notes in our Five Senses Notebook. Most students’ favorite item was the chocolate chip. Their least favorite item, was, you guessed it, the pepperoncini. 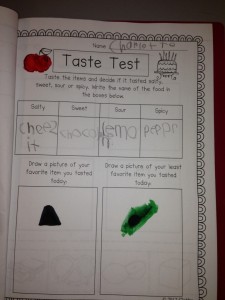 At the end of the experiment, I applauded the students for giving each of the items a try and trusting me with their taste buds. They were such great sports.

Next week, we will explore the sense of hearing and smell. Just wait and see what I have in store for the kindergarteners!