We have been exploring teen numbers. The teens often trick five year olds when they try to write them.  For example, when a young child hears sixteen, they like to write it 61, (six and one for the teen) following the usual pattern of two digit numbers. (For twenty-one, it makes sense that the number is written 21.) Tricky, right!? So we have spent two days exploring these Tricky Teen numbers. Today we focused on teen numbers being ten plus the other digit. I posed the question, “How can you show the number eleven using your fingers?” The children were paired up and encouraged to explore an answer to this question. One group showed one finger on each hand and exclaimed, “This looks like 11!” Another group showed me ten fingers quickly, put them down, and then one finger. 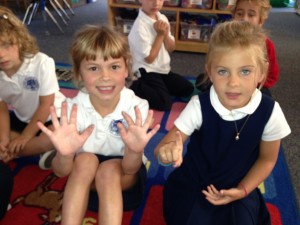 This team worked together to show the number 11 using ten fingers plus one finger.

Once we figured out a way to build teen numbers working as a team, we built five more teen numbers. The children enjoyed working with their neighbors.

Next, I gave directions for an activity. Students chose a teen number and built a chain demonstrating the concept of “ten plus ___.” We decided that the tens would be demonstrated with a green paper chain and the second digit would be created using purple paper to create a purple chain. 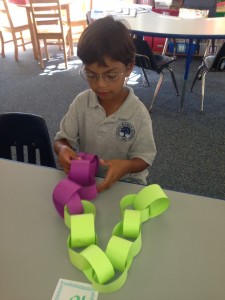 A student makes the number 16, or ten plus six.

We will continue working on this tricky concept, but for now, the students have a good foundation! (and they had a chance to strengthen their fine motor skills as well!) 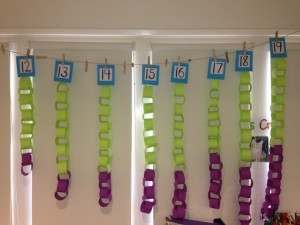 Here is the final product! The students can reference their work daily!