Our Magna Wall collaborative project is coming to an end. The pieces have been created and will be presented to the kindergartners tomorrow during a field trip to the engineering lab. Each student received a “teaser” video in the meantime….we can’t wait to see the finished products tomorrow!

If you listen carefully, you can hear the 3D printer working in the background! 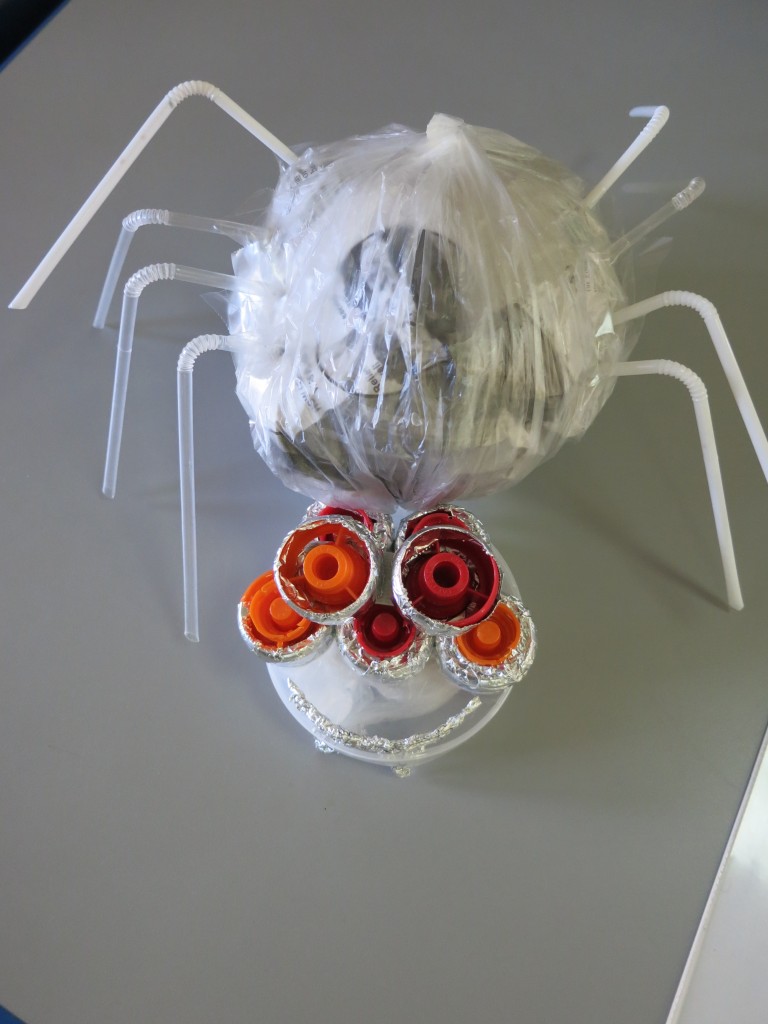 The STEM Family Project for October/November was to create a spider or bat from recycled materials. Students recently brought in their creations and recording sheets. I was impressed with how they used their imaginations and created unique inventions. I really wanted the kindergartners to share their projects with our third grade buddies.  This was the perfect activity to showcase their creations, practice public speaking, and give appreciations.

The third graders were impressed with the assortment of materials that were used and found the kindergartners ideas innovative and fun. 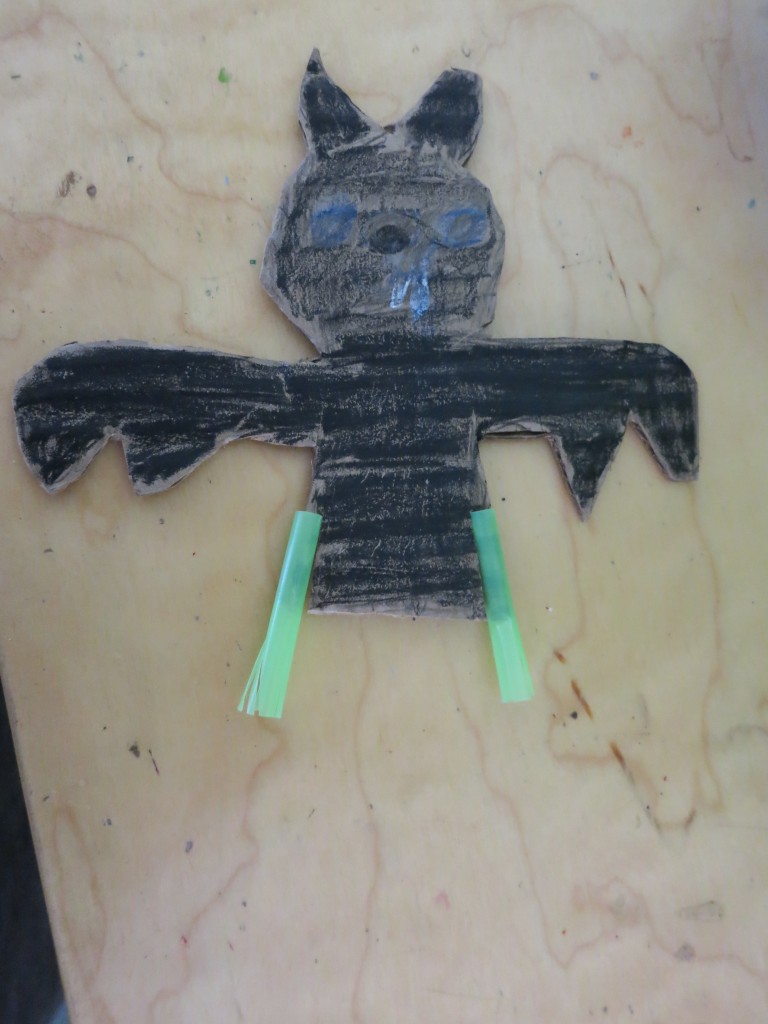 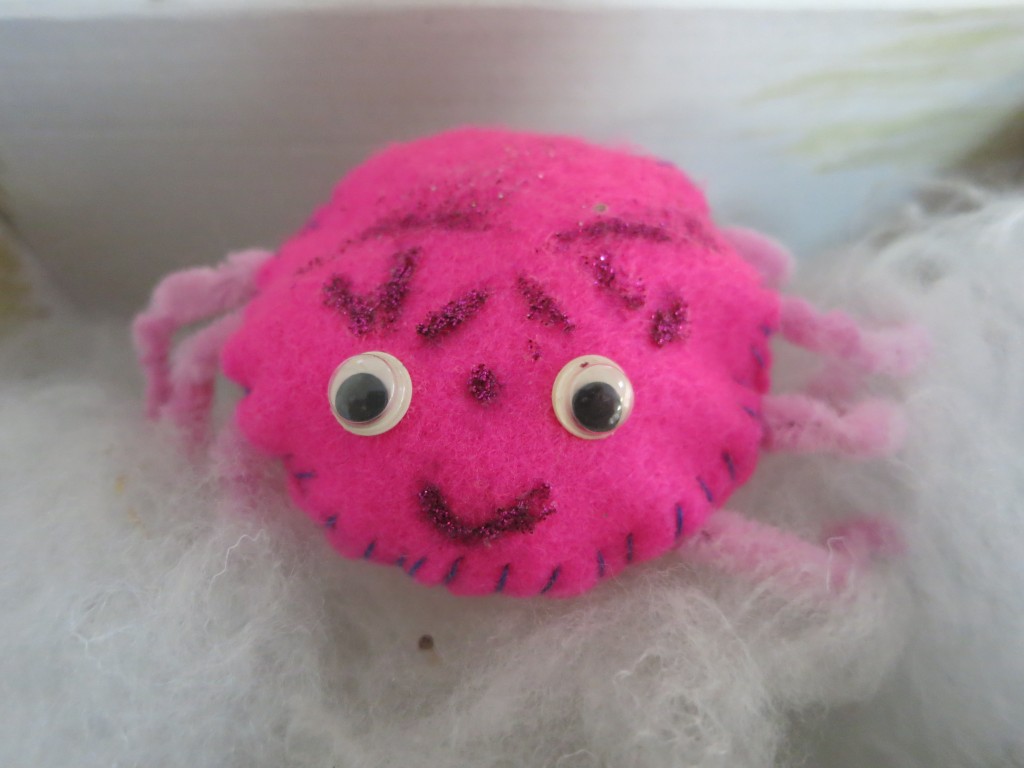 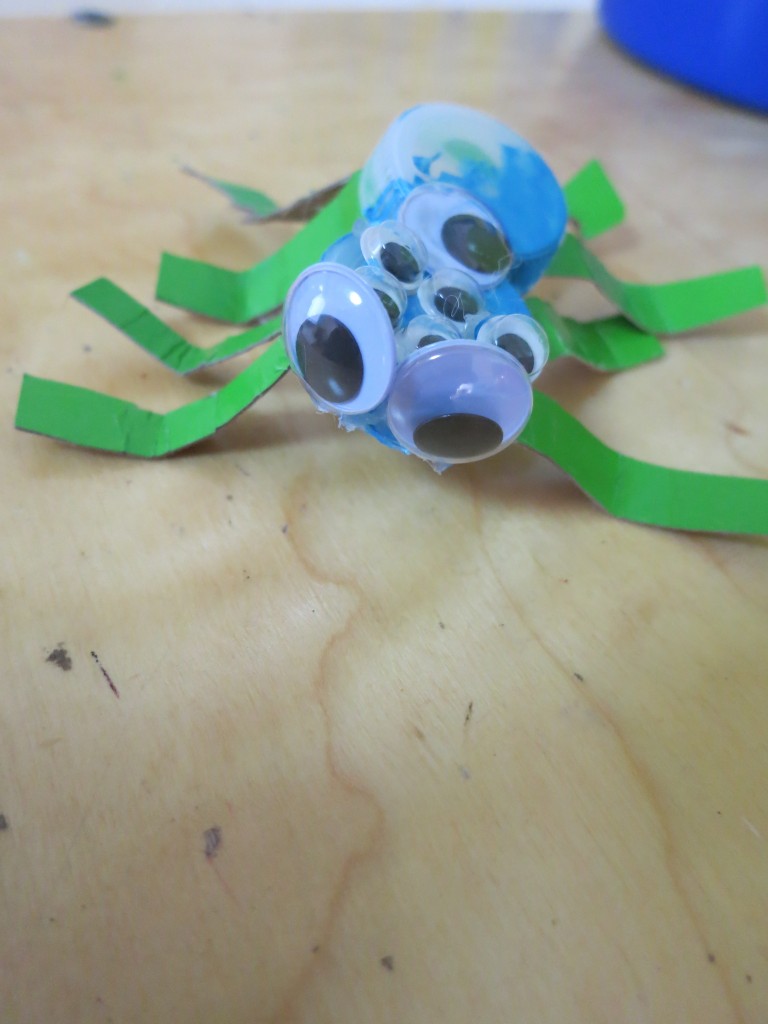 Here are two of the presentations:

It was a nice way to wrap up the week. Next week we delve into our study of bats!

We video conferenced with our high school engineering partners today. The kindergartners were each shown a 3D prototype of their inventions created by the 3D printer. (The prototypes are not to scale and do not have the requested colors or decorations.)

“Can that be purple?”

After school, Mr. Moore dropped off several of the prototypes. Won’t the students be surprised when they arrive at school tomorrow?! 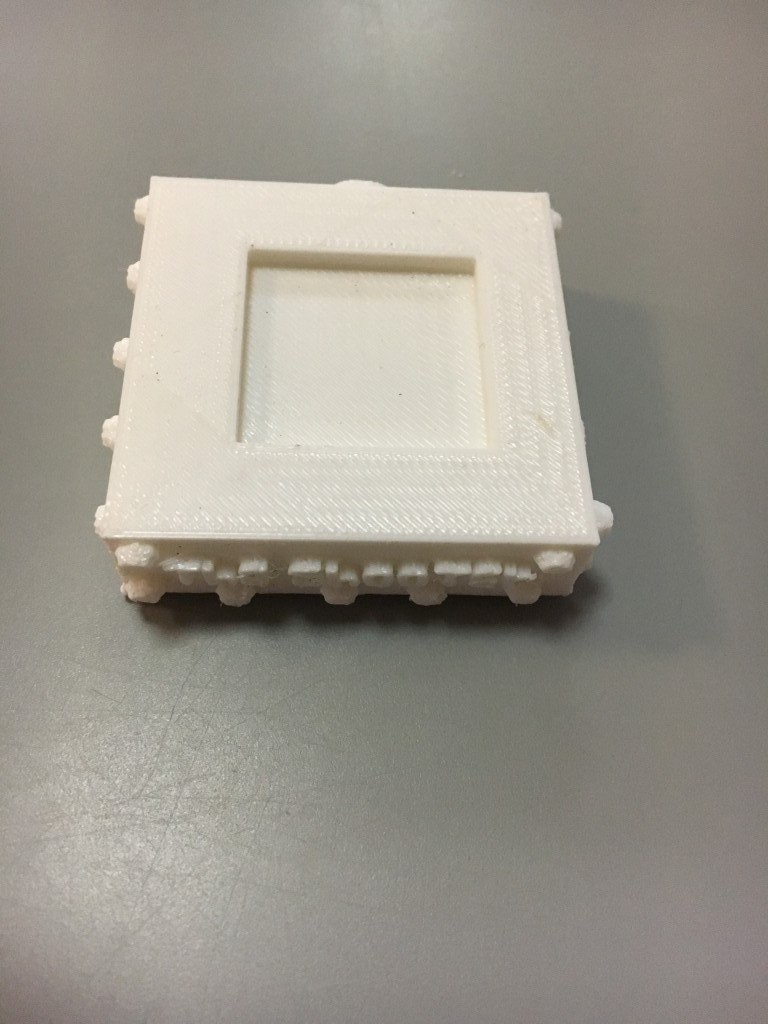 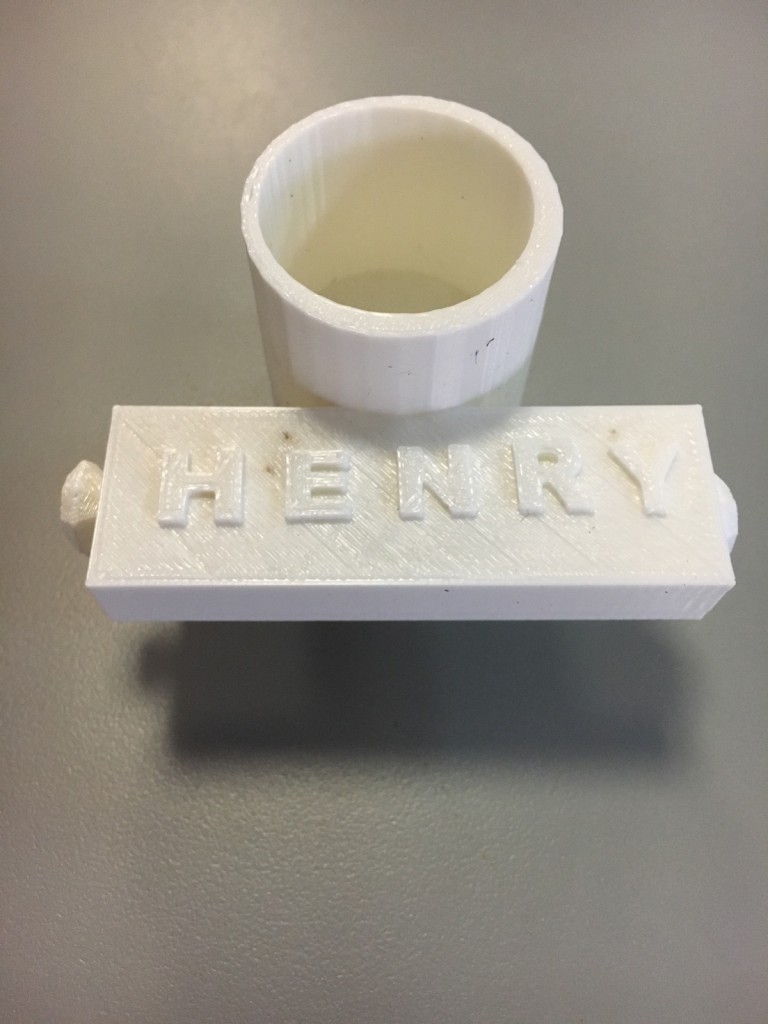 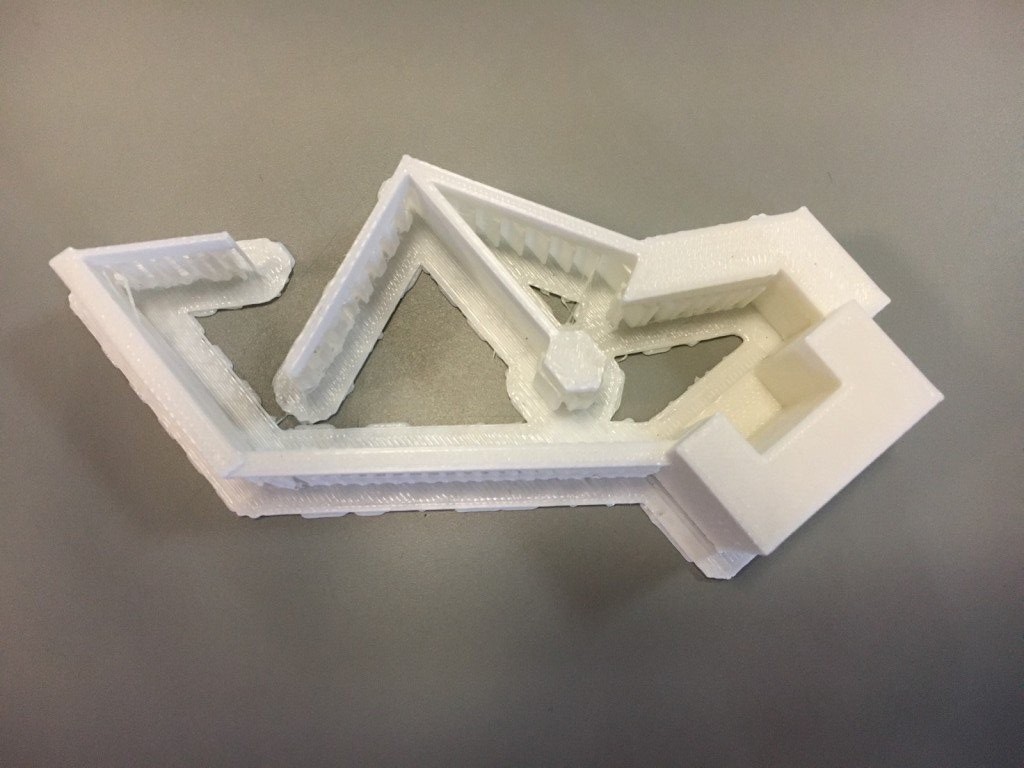 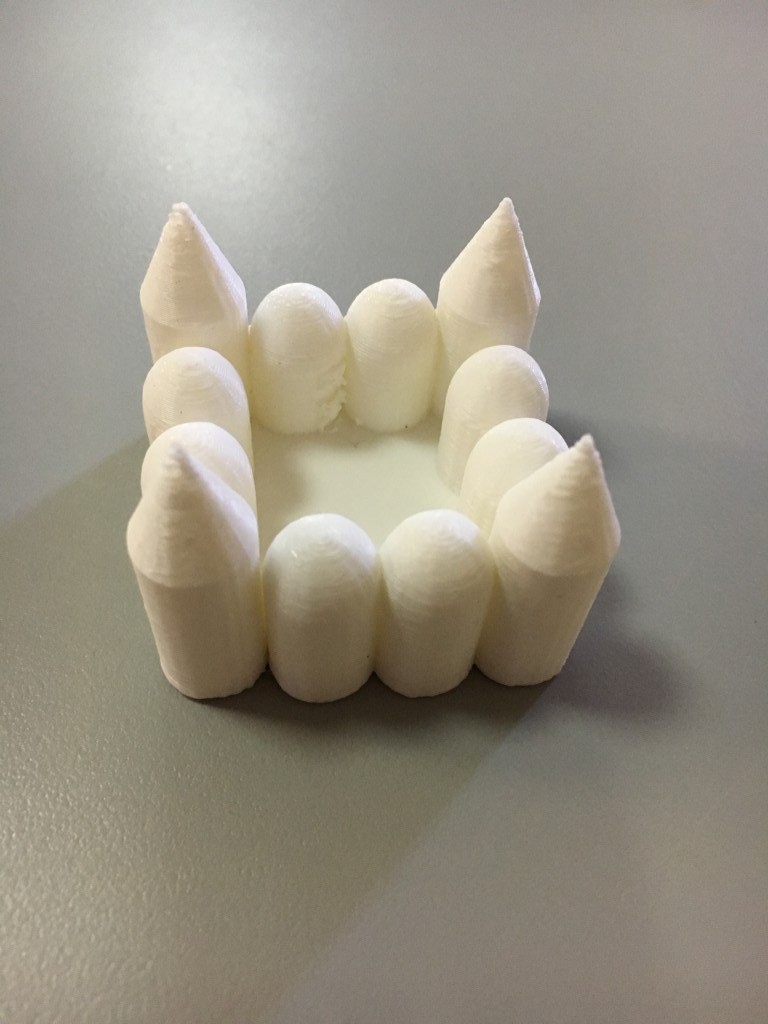 The next step includes building the actual piece to scale with the requested decor and color. We are very excited to see how the final projects turn out!

We video chatted with our Magnawall engineering partners today. Students were shown a prototype based on their original meeting and asked to give feedback. 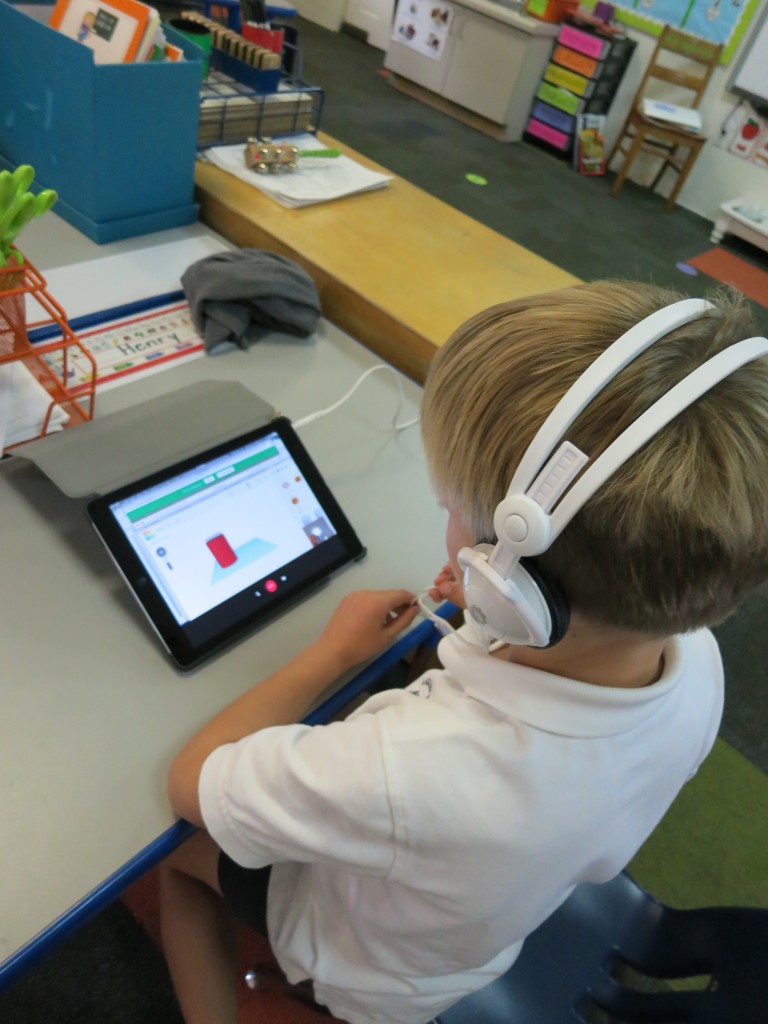 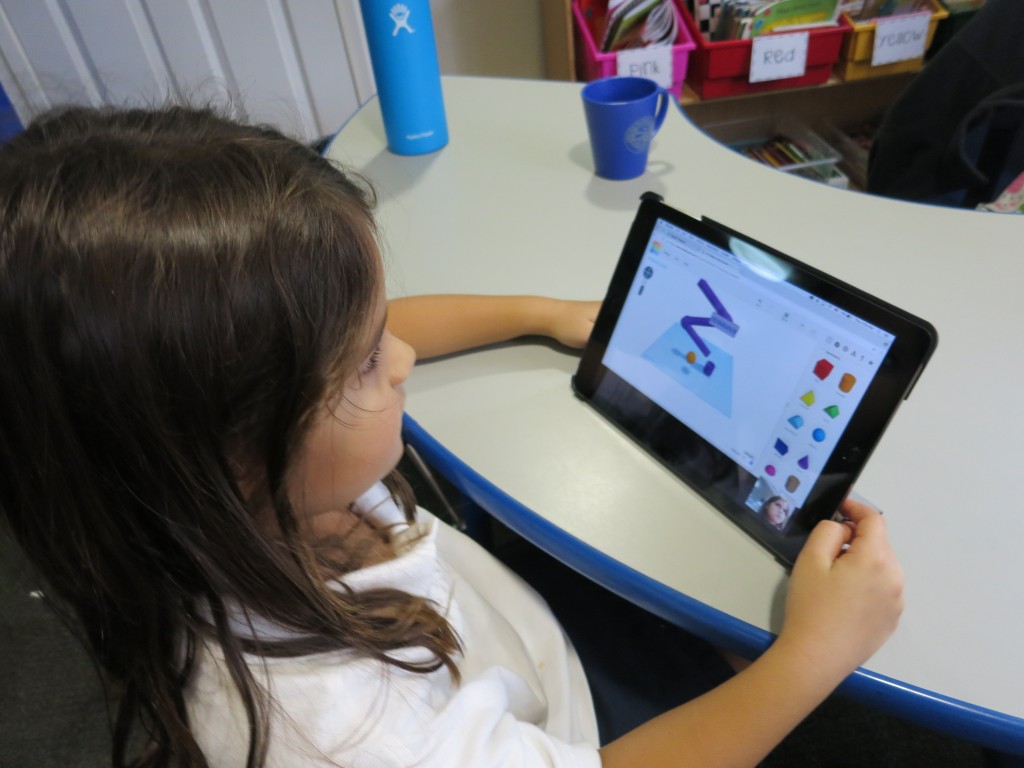 (My apologies in advance for the video quality….)

I encouraged students to make changes, but many were already happy with the creations…those high schoolers lucked out! Now the engineering students will begin fabricating the “missing pieces” while we anxiously await!

The Introduction to Engineering class arrived on campus right before lunch. While the kindergartners were enjoying the last few minutes of recess, the high school students began exploring the Magnawall so that they had a true sense of what they will be creating.

Mr. Moore called the students together and introduced them to their partners. The high schoolers were directed to retrieve their sketch books and a writing utensil, and the kindergartners were encouraged to design away! Each kindergartner then described his/her concept of the piece they felt the Magnawall is missing. 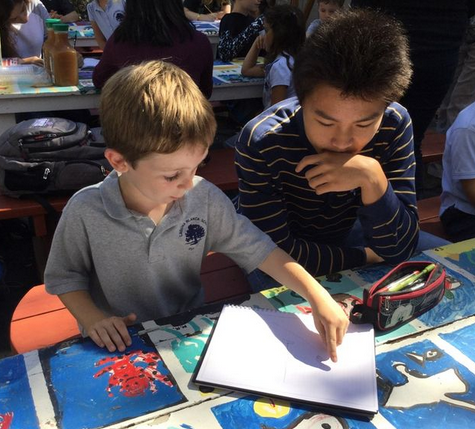 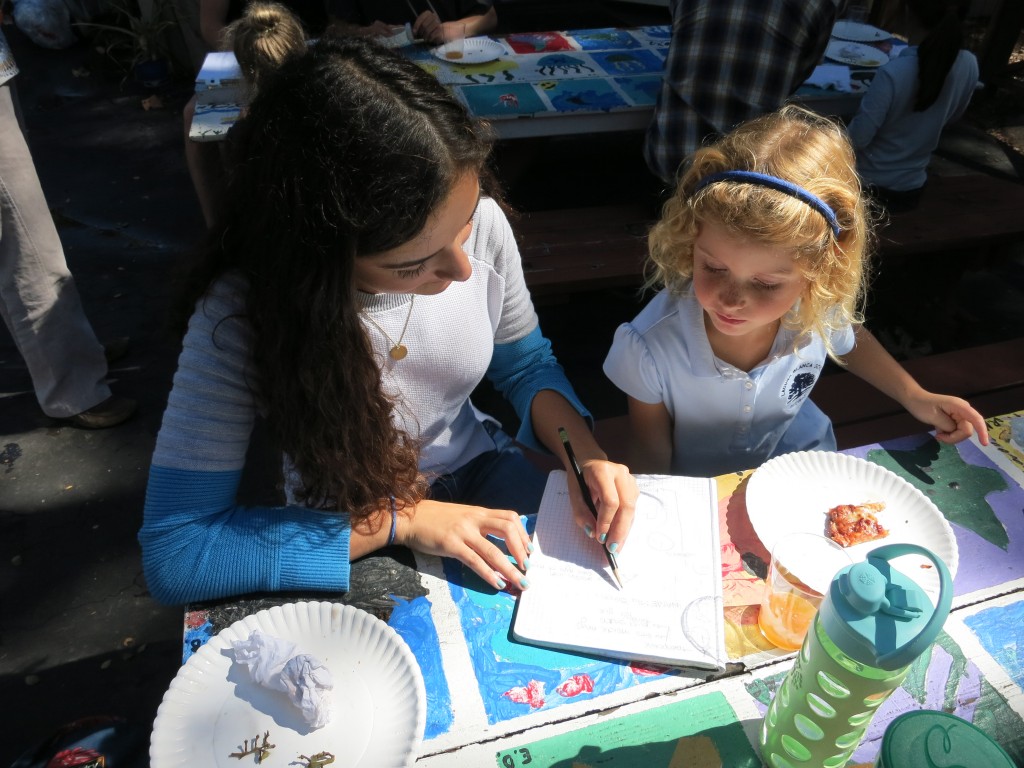 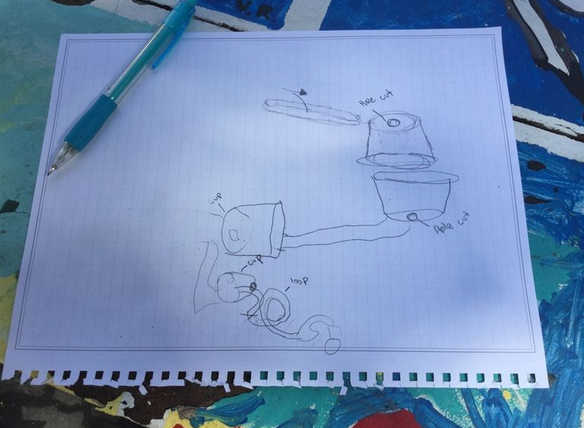 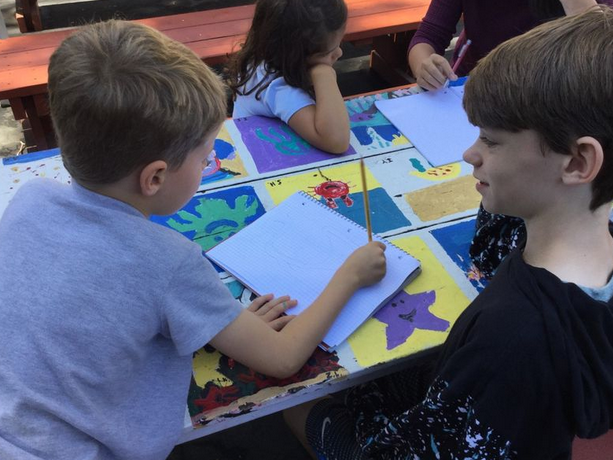 This student describes several missing pieces, so his high schooler created a Plan A, Plan B, and Plan C.

It was so much fun listening to the kindergartners’ ideas and watching how the high schoolers interpreted them. Next, Mr. Moore asked his engineering students to work with their kindergarten clients to come up with a name for their project as well decorations for the actual piece and prepare a short, one-minute presentation.

We regrouped in the kindergarten classroom where the presentations began.

Now, the engineering students will begin creating- sourcing materials, building models, and acquiring parts. We will video conference next week and the kindergartners will hopefully be shown preliminary prototypes of their designs. Of course, plans and ideas can change….and the kindergarten clients are encouraged to verbalize these changes when they develop!

After the kindergartners spent several class sessions exploring the Magnawall and it’s pieces, we came together and used a more critical eye to explore the parts that come with the wall. The parts include:

I asked students to think about a part we need for the wall that we don’t currently have.  Students came up to the Smart Board and illustrated their ideas. Take a look: 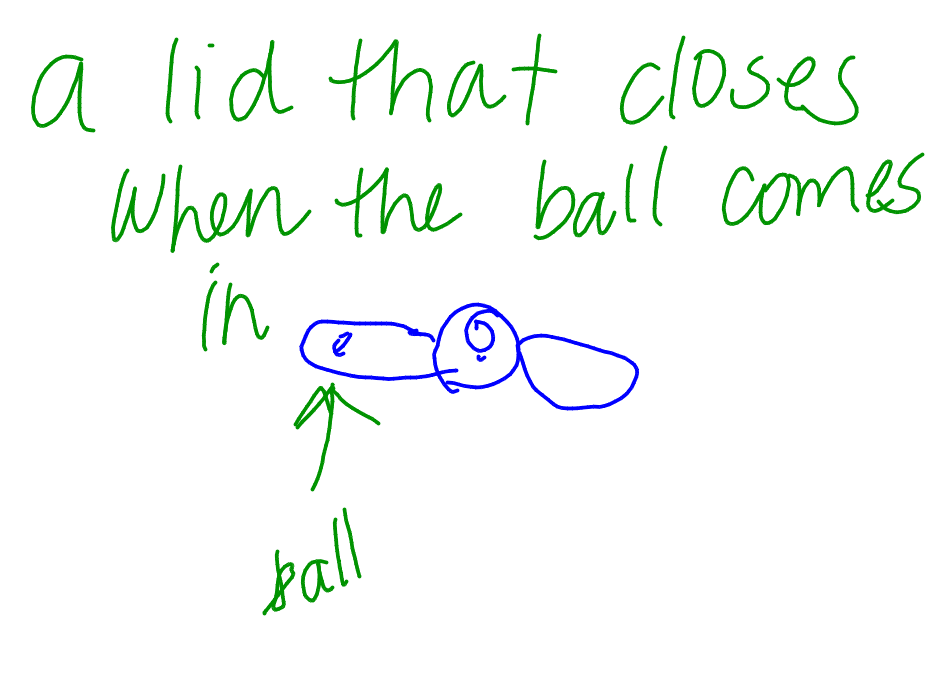 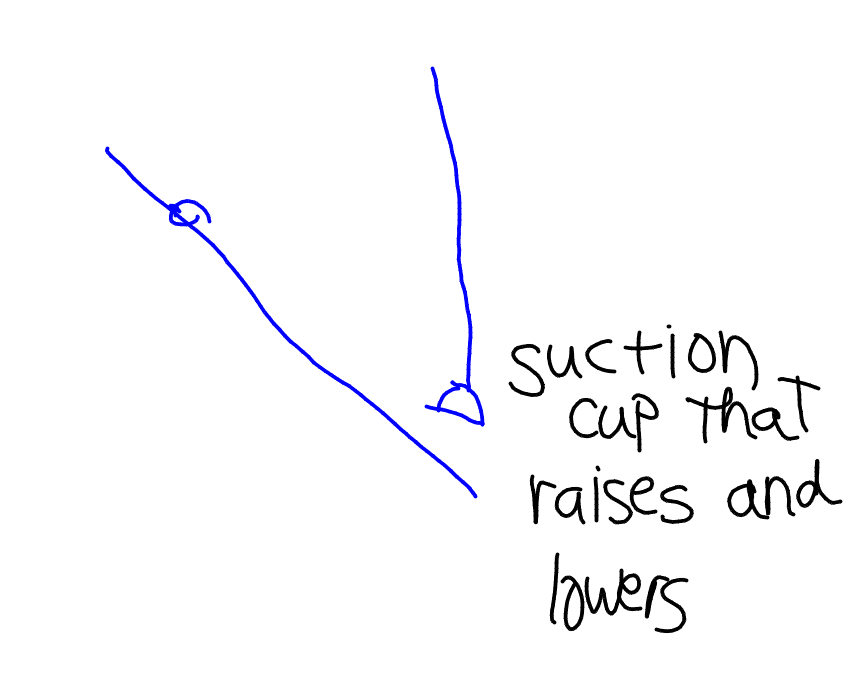 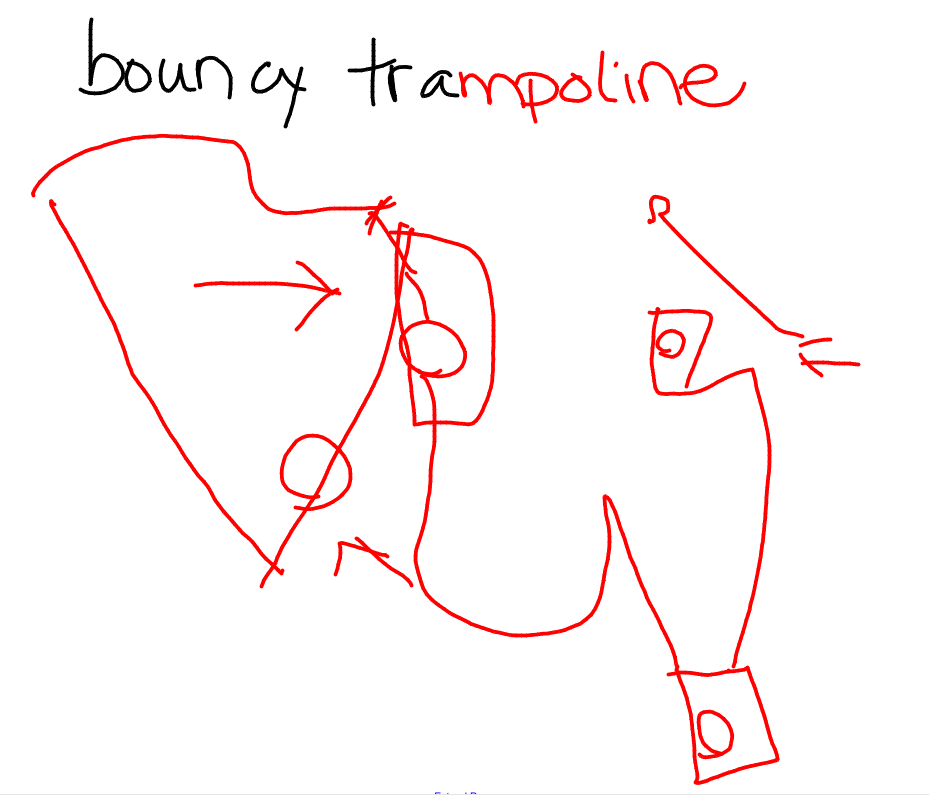 Here is a student explaining her idea:

I saw the creative juices begin to flow. Students were encouraged to return to their tables and sketch their ideas of the missing Magnawall parts. 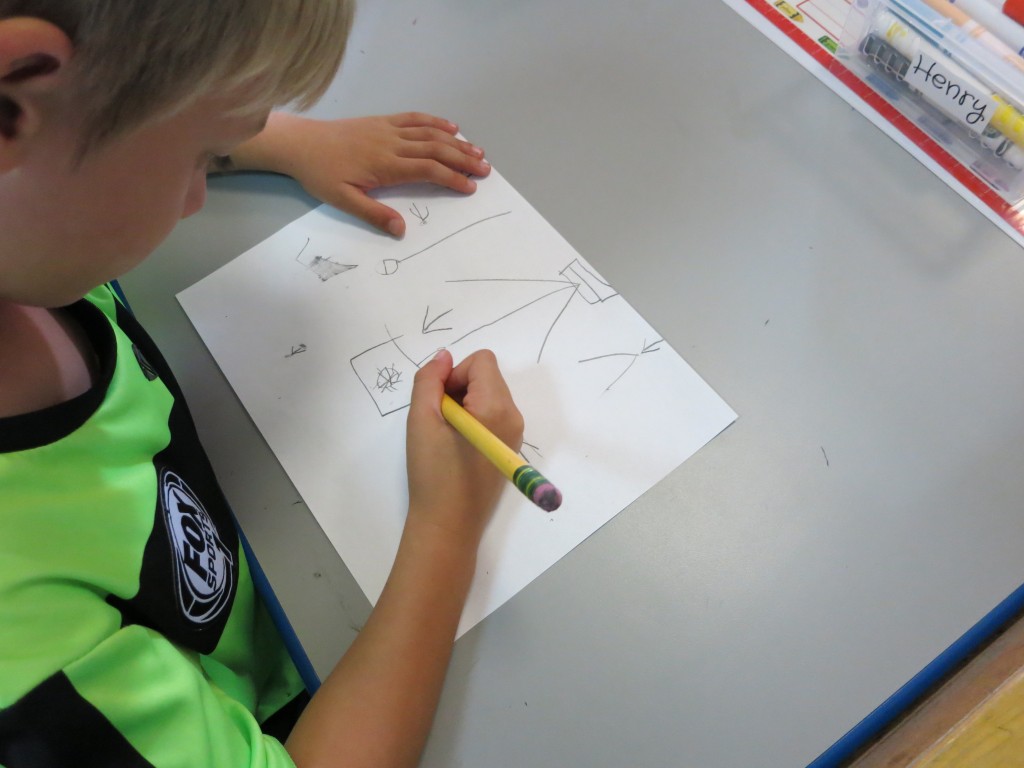 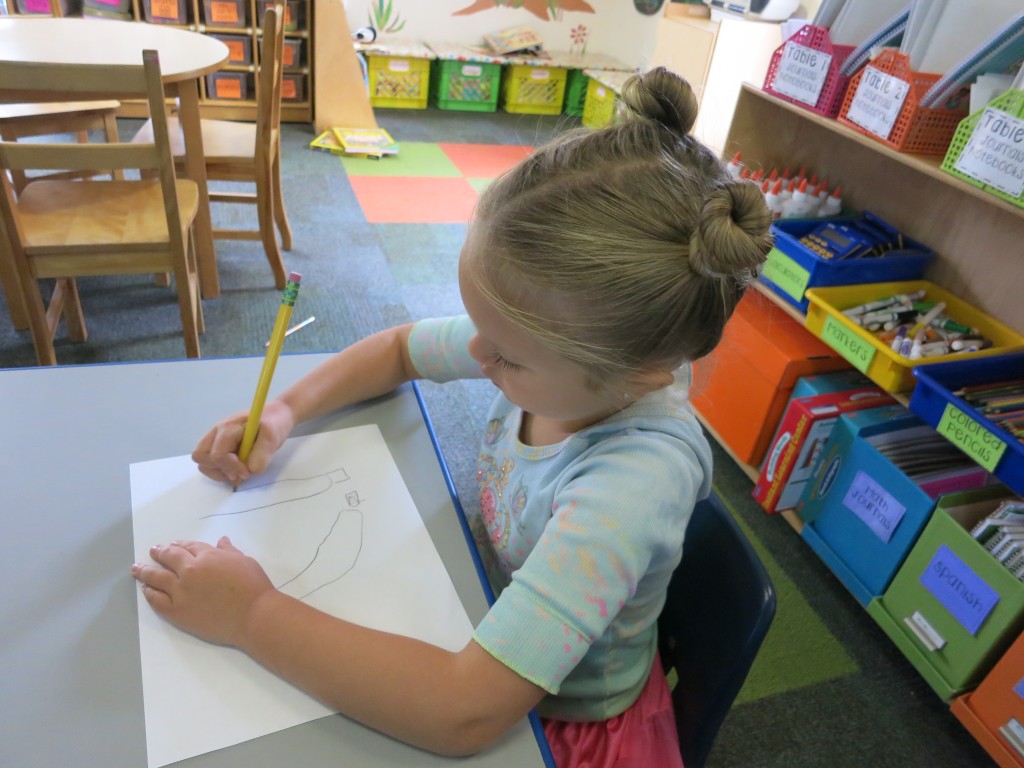 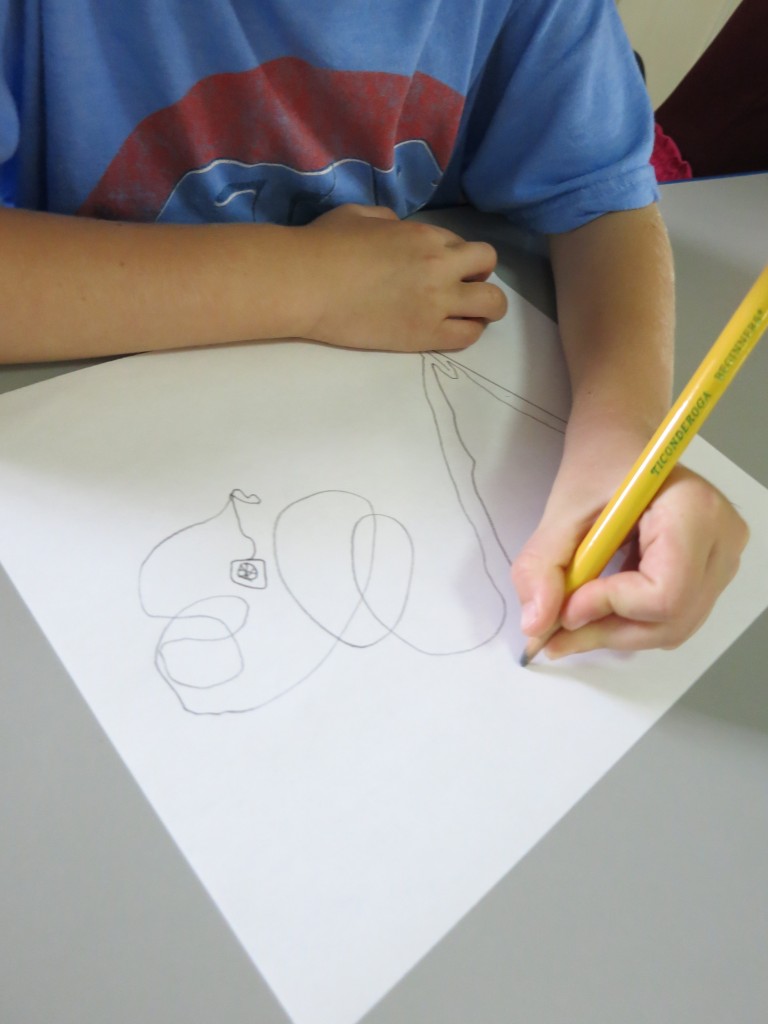 Next week, Mr. Moore’s Upper School Engineering class will pay us a visit. Their job will be to create “the missing piece” that each kindergartner has envisioned, making the kindergartners the clients! I am excited to see how the students’ ideas evolve over the next few weeks and what the final pieces produced look like. 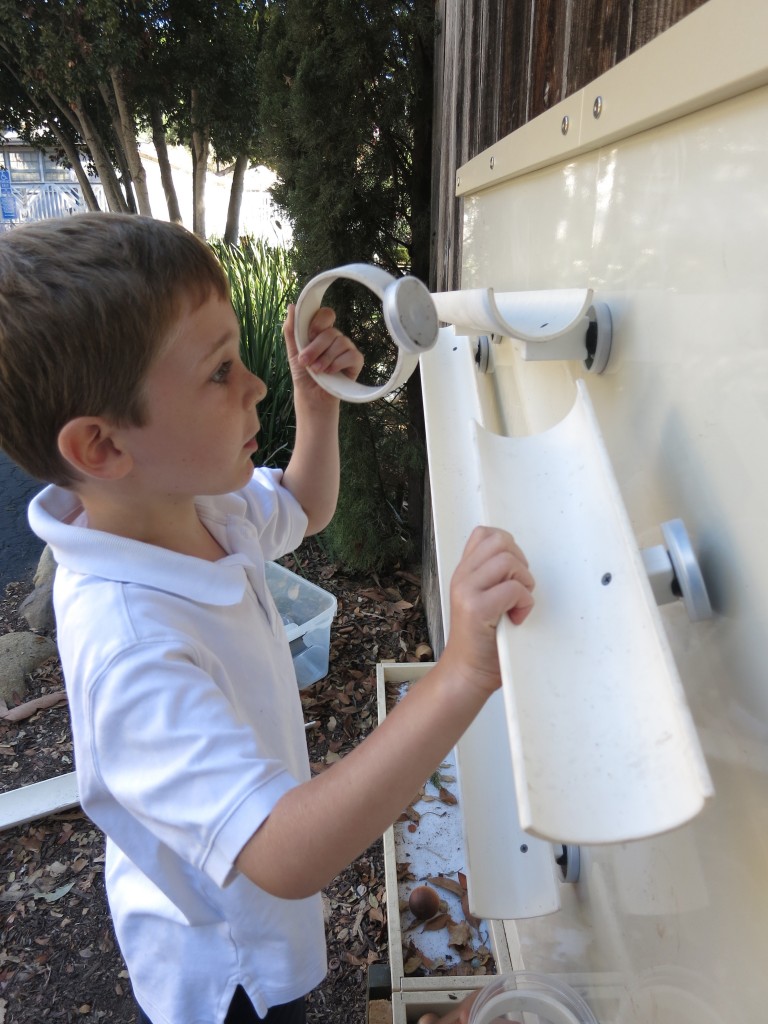 The kindergartners were introduced to our new Magnawall. The installation of the Magnawall is the “hook” for a STEM infused project created by Upper School Engineering instructor, Zack Moore, Lower School Science instructor, Clara Svedlund, and myself. What is the MagnaWall and what concepts does it teach? According to Kodo, the company responsible for creating it, “The Mag Wall is a unique platform for expanding creative play in your classroom or outdoors. Examine slope, cause & effect, momentum and gravity through hands on experimentation! The Magnawall was developed to provide a hands-on, minds-on, open-ended means for experiencing Newton’s Laws of Motion. When it comes to motion, Newton’s Three Laws summarize everything you need to know about teaching young children about how things move.

1. A moving object will keep moving in that direction until something physically pushes on it. So if the ball is rolling down the ramp and collides with something, its motion will change.
2. It takes more force to accelerate massive objects. If you placed a bowling ball on the ramp, its mass would be greater than the force pushing up from the ramp, which would cause the bowling ball to push the ramp down and probably hurt everyone’s feet. So don’t use a bowling ball! If you used a wooden ball on a ramp the forces pushing on the ball, coupled with the mass of the ball would make it move forward. If you used a tiny marble on the ramp, its small mass would cause it to accelerate down the ramp quickly, because it has much less force than the other forces at work.
3. The third law refers to action and reaction pairs. My force is pushing down on the floor as the floor’s force is pushing up on me. So goes the same for the ball. It is pushing down on the ramp and the ramp is pushing up on it.”

Students explored the different pieces in preparation for the cross-age level learning that will take place next week. 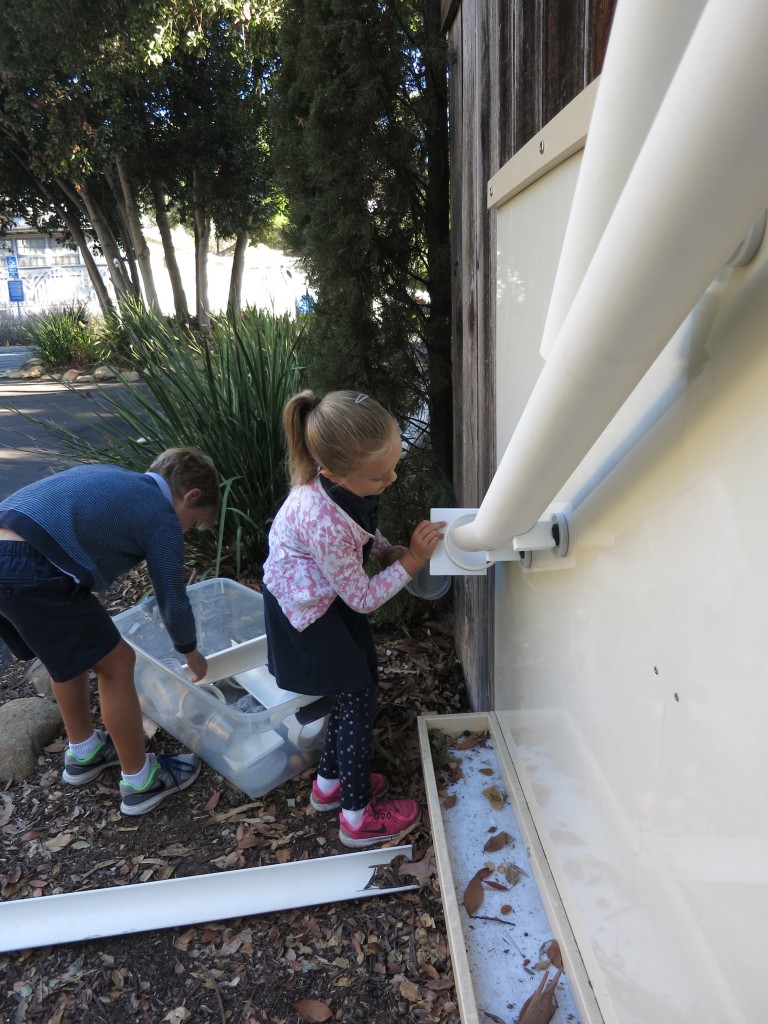 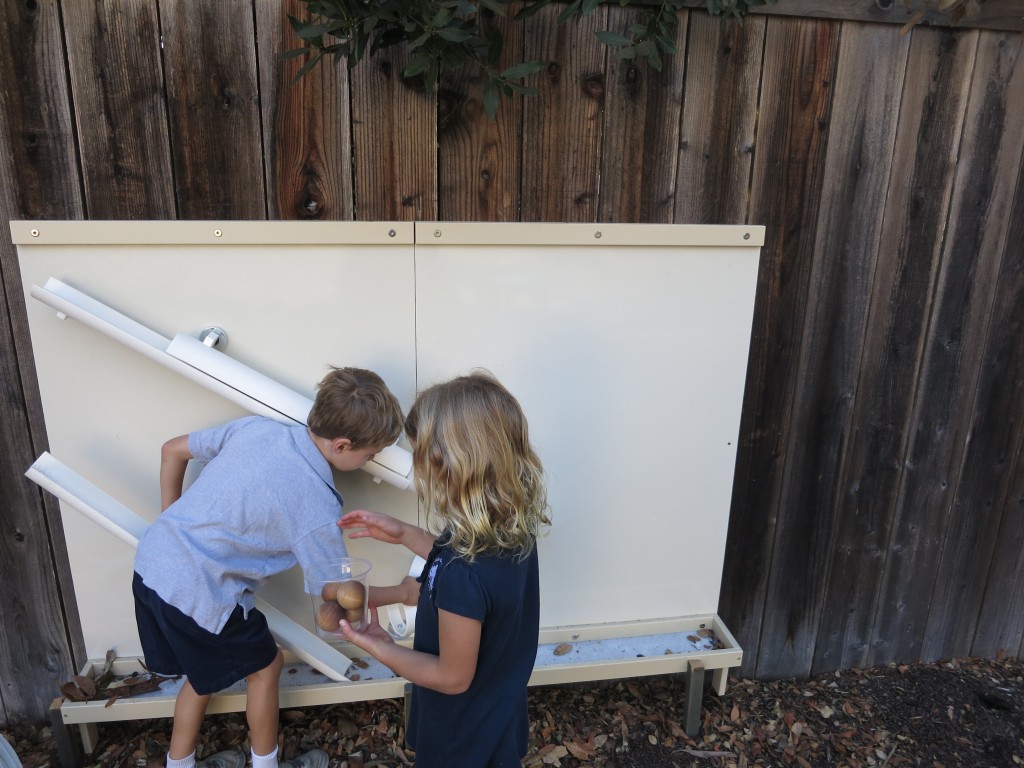 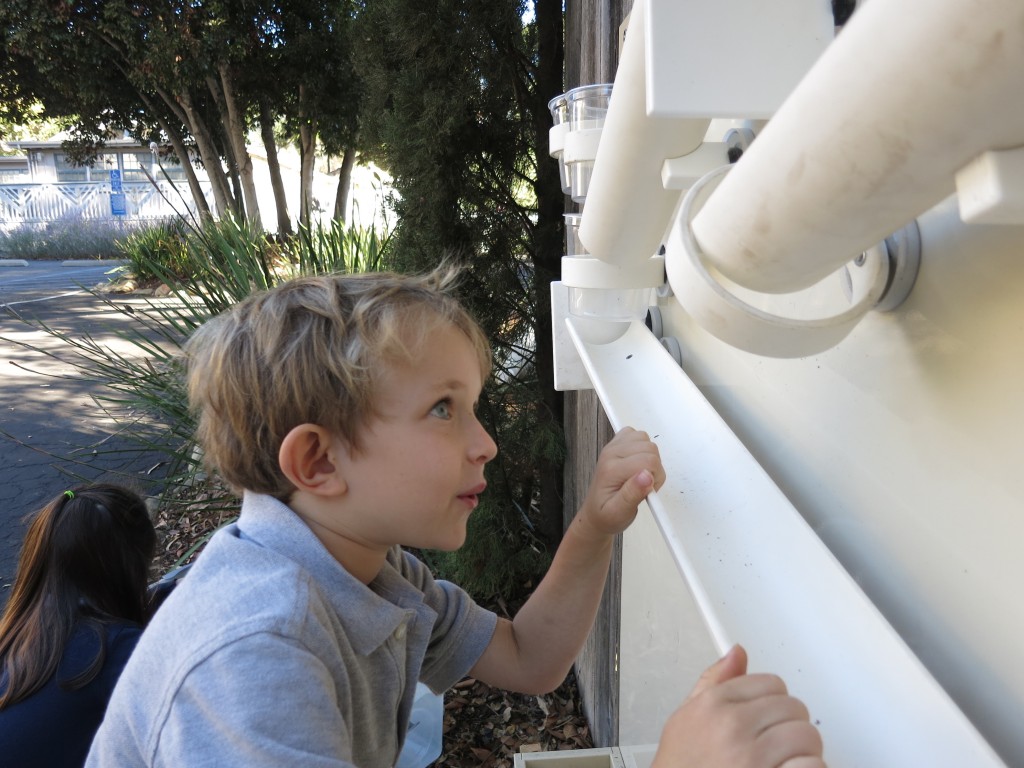 It was a great exercise in listening to a partner’s ideas and sharing construction ideas.