We are exploring algebraic thinking in math these days. It all started with “Pocket Problems.” Imagine an image of a pocket on the Smart Board with the statement, “I put one quarter in the pocket.” At this time, I had a student move one quarter into the pocket. Next, I said, “What would happen if I put five more quarters in the pocket? Would we have more quarters or less quarters? How many quarters would we have?” Here’s what it looked like: 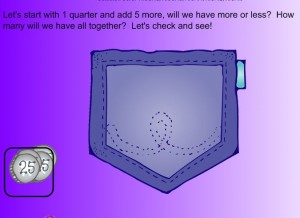 Have I mentioned before just how much I love the Smart Board?! The students actually moved the quarters into the pocket as I posed the questions. Then, the students guessed how many total quarters there were in the pocket and I was able to move the pocket to see if we were right. Everyone had an opportunity to solve a Pocket Problem on the Smart Board.

Next, students were paired up for a game. Each pair was given eight little animal erasers and a paper cup. The objective of this game was for students to continue using algebraic thinking to solve some abstract number problems. One student was in charge of hiding a certain number of erasers under the cup, while leaving the remaining erasers on display. The partner then had to guess how many erasers were hidden. Students soon realized that they could “count on” to the number of erasers that were shown to figure out the number hidden! 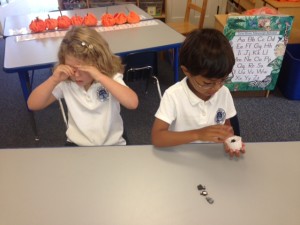 A student covers her eyes, while her partner hides some erasers. How many are under the cup? 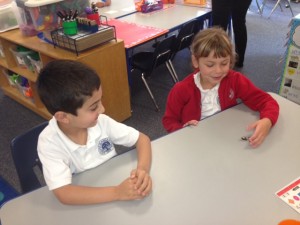 Another student figures out that if she’s holding two erasers, then there must be six erasers hidden under the cup.

Parents, this is a great game to play at home.  Start with numbers smaller than ten and build on from there.  Have fun!